Posted by Jay Chodagam at 5:25 AM No comments:

Vagabond Heart - Wisdom from Traveling in 23 Countries in 2019

2019 has been a wild and wonderful ride! Someone pointed out, if you did the math, it's a new country every 2 weeks. A lot of people ask, why do I travel so much. I say, because I can, and have the freedom to do so. I can take my work with me. And I am constantly on the lookout for places and experiences that I would like to bring my tribe to. Travel has been my greatest university (see post). For the first time in history of mankind, ordinary individuals have the tools to learn, plan and share trips to almost every corner of the globe.

The other popular question I get from friends is ‘what was the best place of them all’. To that, I’d say it’s not the places that define my experience, it’s the people I met. I’d to like to share anecdotes for this and six other key insights from coddiwompling through 23 countries in 2019.

There's Benefit in Everything, If We Remain Open to Seeing It 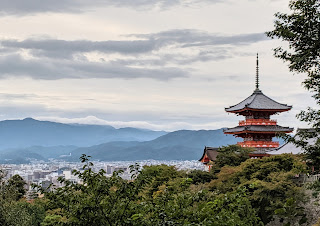 Bewildering Universe!! One morning in my Kyoto hotel room, I booked a trip to Baja California (Mexico) to stay on a remote beach to practice kitesurfing and work on the next meditation series. Later that day I was scheduled to meet a friend for dinner. When I got to the restaurant I found out she's running so late coming into Kyoto that I would be eating by myself. Turned out there's a wait at the restaurant and a spontaneous conversation pops up with a mother and son. We hit it off and end up having dinner together. Here's the wowie. They are from Mexico with family in Baja. Before the nights done, I'm invited to lead group meditation(s) with their Baja relatives to help cope with a recent bereavement.

What are the chances of all this unfolding the same day, connecting dots 9,000kms across the Pacific? Grateful for the service🙏 Yet another seal of confirmation that there's benefit in everything, IF we remain open and unperturbed.

Posted by Jay Chodagam at 12:24 PM No comments: 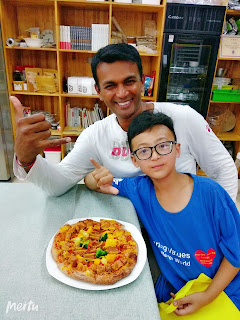 Posted by Jay Chodagam at 12:17 PM No comments: 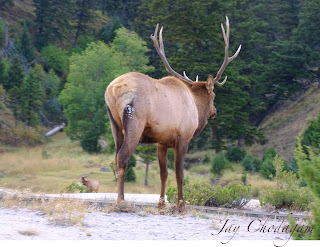 "This retreat brought together a diverse group of strangers and created the space and opportunity to share, grow and become a family. The program’s variety was wonderful."

"Being in this amazing place made me feel the joy of introversion. The practice will help me to enhance my spiritual journey. Be with nature and enjoy every moment."

"First, this retreat helped me find and see yoga in a new light, which has inspired me to continue my own yoga practice and get more in depth and consistent with it. This retreat helped me see potential future possibilities for me in the way of work. The retreat has really made me realized I am not fulfilled with where I am geographically and in the workplace which makes me feel motivated to follow in similar footsteps as Jay and Suzie. Jay’s meditations really hit home with the idea of sending light over the world and I believe this is a powerful method both through meditation and through our own actions. I am excited to try more of this and want to explore this idea further."

"I'm a little bit more of a nature lover today
Doing yoga in the morning is really nice
Waking up early and sleeping early
Being vulnerable about myself just a tad"
Posted by Jay Chodagam at 12:01 PM No comments:

Our Power and Our Responsibility

Interview with S.O.U.L. TV on visions for what is possible when we shift our value system to one that supports our thriving
Posted by Jay Chodagam at 8:22 AM No comments:

Bohemian Spirit in the Buffet Line

Ran into this guy in the buffet line in Prague and was fascinated by his background. His story makes any evolutionary theory of nature OR nurture look lame. Can you guess his ethnicity?

Some interesting facts about this young fellow:
1. His race was almost completely wiped out by the Nazis (no, not Jew)
2. Literacy among his people is among the lowest on the continent.
3. One of 6 kids in his family, he’s the first AND only one in his ENTIRE ancestry to get a college degree. Not one, but he’s working on his second degree while holding a job with the state department of welfare housing.
4. He is as well versed in American and Asian politics as he’s with his country’s.
5. He plans to publish a series of history books for children to educate them about minorities and their contribution to the culture.
6. The “Bohemian spirit” can be traced back to his ethnic group.
7. He turned vegetarian because it’s the right thing to do.


Wisdom of a seer, sharp as a tack. Felt like I was conversing with an Obama in his college days. Won’t be surprised if he becomes president of this country (or a leading diplomat) one day.
Posted by Jay Chodagam at 2:44 AM No comments:

What would you call when two guys meet for the first time, begin a conversation, time stops, 3 hours later there are tears of joy and it’s priceless? Brosperity.

Story started with spotting a cafe while walking around Brno, Czech Republic that had ❤️ on their logo and no price list. Dobro kava serves up your fav beverage if you commit to a kind act listed on their menu (or something else you choose.) I’ve seen religious sects offering free meals, cafe in cities with pay-it-forward model and creative philanthropy schemes that benefit certain groups of people. But I didn’t see this no-ones-left-out with no-money-involved coming from a town in the middle of Czech Republic which I never heard of until 3 days ago. So I asked to meet the one behind this goodness.
Guy happens to be open and 15 mins later we’re entrenched in a conversation. Libor started his first internet business at 17. By 25, after 7 companies, he had more money that he ever needed. He tried at first to give it away to charity but noticed the charity was eating most of it before it got to the beneficiaries. He happened to pick up ‘The Dalai Lama’s Cat’ in Bali. A story about the cat in a coffee shop sparked the idea.

After 3 years and 30,000 cups of coffee, the idea of Dobro Kava (good coffee) has spread to other cities in Czech. Most moving stories were of young kids coming back a year later to share how the random acts of kindness to strangers started a chain reaction in their community. This became a reference in their lives that even under pressure, choose love.

Bonus: Libor’s formula for finding your mission -
Ask yourself:
1. What makes you most happy?
2. What do you look forward to in next day?
3. What do other people say you are very good at?
4. What gets you so engaged that you forget time and meals?
Posted by Jay Chodagam at 2:40 AM No comments: 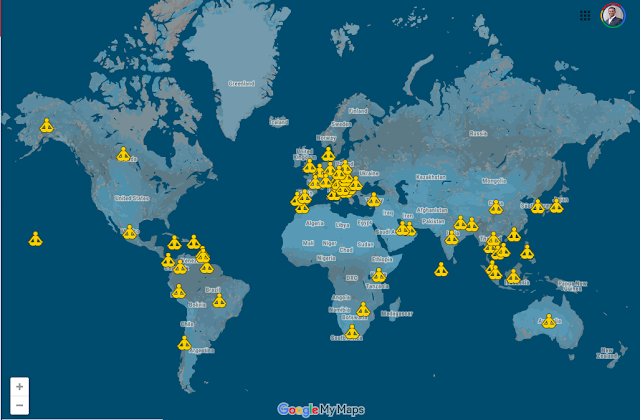 Friends who see my travel posts ask how many countries I've been to. Didn't have an answer, so I sat and listed them out. Total of 41. They go 'wow'. When I plotted them out, I went 'wow', how little have I seen! Travel has been my greatest source of knowledge, more than any university education, book or TV show, to understand one another, to discover what makes us human and what truly matters.

Today, there are 195 countries in the world. That's a balance of 154. I'm giving myself 20 years to see, be, do what I can. That's 7 nations per year to cover the pale blue dot, our home, in the vast cosmic arena. On it everyone you love, everyone you know, everyone you ever heard of, every human being who ever was, lived out their lives. As Carl Sagan beautifully put it, it holds the aggregate of our joy and suffering, thousands of confident religions, ideologies, and economic doctrines, every hunter and forager, every hero and coward, every creator and destroyer of civilization, every king and peasant, every young couple in love, every mother and father, hopeful child, inventor and explorer, every teacher of morals, every corrupt politician, every "superstar," every "supreme leader," every saint and sinner in the history of our species lived there – on a mote of dust suspended in a sunbeam. The Earth is the only world known so far to harbor life. There is nowhere else, at least in the near future, to which our species could migrate.

Why 20? There are personal, political but the most important reason was given by 91 scientists from 40 countries who analyzed more than 6,000 scientific studies to draft the Paris accord. 2 deg rise in temp by 2040. At the current rate we are well on our way to wipe out several island nations and major cities in that time. Food, water, fresh air and coral reefs will be scarce.

As I plan these jaunts, I'd like to open it to friends who may want to join/help/cheer. It'll be sort of an awakened traveler collective. So, hit me up folks, with your aspirations, ideas and observations 😊
Posted by Jay Chodagam at 2:32 AM No comments: 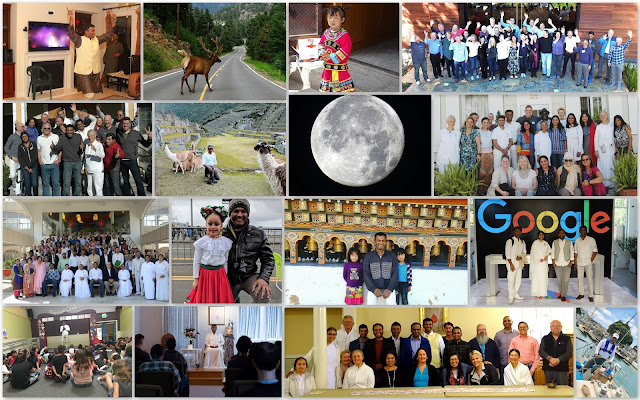 Grateful for the incredible 2018 ✨

May we be closer to our wholeness in 2019 not just for ourselves but with all life on Earth 🙌🏼🌏💓
Posted by Jay Chodagam at 10:25 AM No comments:

Posted by Jay Chodagam at 10:22 AM No comments:

Mayor's Recognition at Peace in the Park 2017 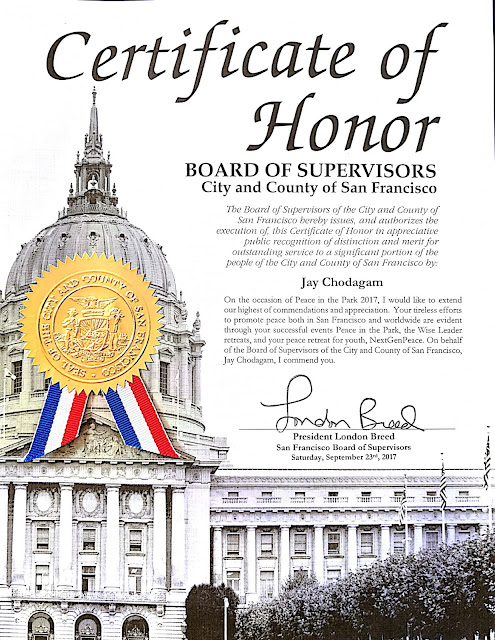 Posted by Jay Chodagam at 10:17 AM No comments:

Your children are not your children.
They are the sons and daughters of Life's longing for itself.
They come through you but not from you,
And though they are with you yet they belong not to you.

You may give them your love but not your thoughts,
For they have their own thoughts.
You may house their bodies but not their souls,
For their souls dwell in the house of tomorrow,
which you cannot visit, not even in your dreams.
You may strive to be like them,
but seek not to make them like you.
For life goes not backward nor tarries with yesterday.

You are the bows from which your children
as living arrows are sent forth.
The archer sees the mark upon the path of the infinite,
and He bends you with His might
that His arrows may go swift and far.
Let your bending in the archer's hand be for gladness;
For even as He loves the arrow that flies,
so He loves also the bow that is stable.
Posted by Jay Chodagam at 1:14 PM No comments:

Of Birds, Boats and Being 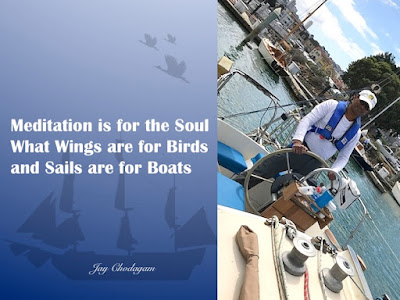 Posted by Jay Chodagam at 10:47 AM No comments:

Simple Formula for a Happy Life

Simple Formula for a Happy Life

Live beneath your means.
Return everything you borrow.
Stop blaming other people.
Admit it when you make a mistake.
Give clothes not worn to charity.
Do something nice and try not to get caught.
Listen more; talk less.
Take a 30 minute walk everyday.
Strive for excellence, not perfection.
Be on time. Don’t make excuses.
Don’t argue.
Get Organized.
Be kind to unkind people.
Let Someone cut ahead of you in line.
Take time to be alone.
Cultivate good manners.
Be humble.
Realize and accept that life isn’t fair.
Know when to keep your mouth shut.
Go on an entire day without criticizing anyone.
Learn from the past. Plan for the future.
Live in the present.
Don’t sweat the small stuff.
It’s all small stuff.

~ Author unknown
Posted by Jay Chodagam at 10:45 AM No comments: